Lessons from the Falcon (OODA) 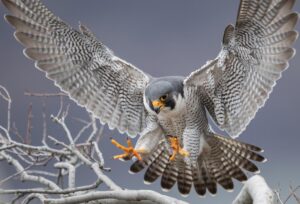 Most people visualize a Peregrine Falcon as a small bird of prey flying like hawks and eagles … soaring in circles, looking for ground prey to pick up (or carrion to snack on). Few truly appreciate the fact that this is a bird of prey only 18″ long that attacks it’s in-air prey in power dives (called “stooping”) averaging airspeed of 180-240 miles per hour ! 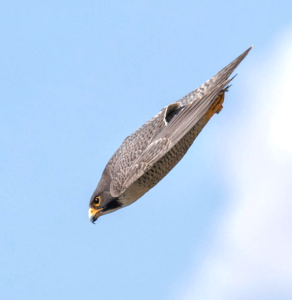 It achieves this aerodynamic feat, by starting from a tactically advantageous position from above, and folding it’s wings along its body to form a streamlined torpedo for attack, it slams into it’s prey from above at full speed, killing it upon impact.

It’s eyes watch its prey for every movement. Its wings adjust accordingly in the high speed to correct its trajectory for impact.

Lets summarize what this falcon does and outline the process in steps: 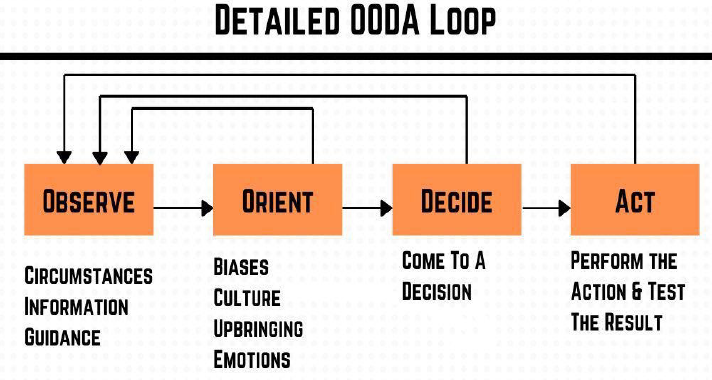 As you can see, each phase can loop back to the first phase of observe (as it should), but being stuck in observation too long means “frozen” and is dangerous.

The more familiar the observer is with the items under the observe phase the faster they tend to move through orient and into decide and act. (this reduces the response time required and improves reaction time to the observed data)

Let’s start breaking this down into useful sections:

think of this as see, analysis then decision for response. You are always responding to something (that something has the initiative, which puts you in the defensive mode)

you have two options:

The OODA loop can also be used in an active manner against an attacker by keeping them in their observe – orient loop (and keeping them from decision – action).  Unpredictability is your advantage in this regard.

The attacker has likely been in the role of predator, observing you, already oriented to the surroundings and your movements, decided when to attack and how based upon predicted and probably movement and responses. They have the advantage of the initiative (and force you to respond to their attack)  Don’t be predictable, change-up movement, direction of attention, force them into the beginning o the OODA loop and regain the initiative.

Training helps us in the Decide/Act phases

Both exposure and training are needed to successfully pass from observe to act.