is the practice of simulating the discharge of a firearm without any live ammunition, or practicing with an inert laser/infrared training platform and may also include the use of a target/feedback system. The terms also commonly refers to simply “firing” a gun that has no ammunition in it.

Dry fire does not pose any real risk of damage to most modern centerfire firearms; however, it can for rimfire weapons, where the firing pin in most designs will impact the breech face if the weapon is dry-fired. Because of this, precautions (such as the use of snap caps) are recommended if such a weapon is to be deliberately dry-fired. Consult your firearm’s manual for details regarding dry fire since an occasional hammer fired pistol has a manufacturer’s limitation as well. Snap caps are available for centerfire calibers as well in just about every caliber.

Dry firing is the practice of simulating the discharge of a firearm without any live ammunition, or practicing with an inert laser/infrared training platform such as an iMarksman or SIRT training pistol, and may also include the use of a target/feedback system, such as the iDryfire or LASR software.

There are many benefits to dry firing. 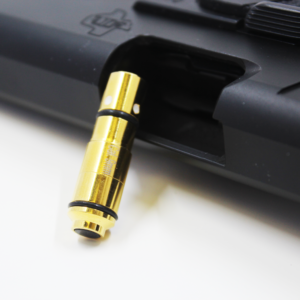 In recent years, a number of companies have developed methods of enhancing dry fire practice to improve skills. Products that illuminate a laser beam, as opposed to a solid projectile, have become increasingly popular. These include chamber inserts available for various caliber firearms, as well as dedicated training pistols or replacement AR-15 bolt carrier groups. There are also a number of target systems for these laser dry fire training aides, that are becoming more affordable and popular. These products help people get more from dry fire practice by providing feedback on shot placement and times, and make dry fire a more enjoyable experience. In addition, there are training aids such as training cards that provide shooters a variety of drills to do that will help them develop skills that will carry over to live fire.

All methods of dry fire require first ensuring that there is no live ammunition in the chamber, the magazine, or any other magazine in the room (this ensures that no live ammo is ever “mixed into” the dry fire practice exercise.

It is generally acceptable to dry fire more modern centerfire firearms without a cartridge or snap cap for limited volume training. However, dry firing a rimfire firearm, or striker based firearms or guns with angled firing pins (such as revolvers with hammer-mounted firing pins or older shotguns) can damage the gun. Furthermore, damage can occur to the chamber mouth of a rimfire firearm. Ultimately, one should check with the manufacturer of the gun to ascertain if it is safe to dry fire, but a snap cap should be used for all high-volume dry fire training where the firing pin articulates.